This page has statements by: 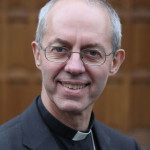 Justin Welby says Christians must stand up for religious freedom of atheists and Muslims as much as themselves.

“We must speak out for others persecuted for their beliefs whether it be religious or atheistic. Taking responsibility for someone else’s freedom is as important as my own.”

Archbishop Welby went on to detail personal accounts he had been given of religious persecution and told of an email he received on Tuesday from the Anglican Bishop in Peshawar reporting how a school had been raided and attacked.

During a question-and-answer session afterwards, he thanked the former MP Evan Harris, a humanist, for his efforts to abolish the blasphemy laws in the UK and said he opposed all restrictions on freedom of speech concerning religion which did not constitute hate speech.

President of the United States

“We will keep standing for religious freedom around the world. And that includes, by the way, opposing blasphemy and defamation of religion measures, which are promoted sometimes as an expression of Religion, but, in fact, all too often can be used to suppress religious minorities.”